“Steel Bridge was slightly different this year with a compete from campus set up. Nonetheless, our team was able to complete a modified bridge and place second in our region!  I am really proud of the team and everything we were able to accomplish in such a short amount of time. Being the first bridge team in the new Fitts-Woolard Hall was also special and has made me excited to design and build for next year.”  Andrew Cook

The annual Steel Bridge competition hosted by the American Institute of Steel Construction (AISC) is a tradition held every spring. Typically, the student chapter of American Society of Civil Engineers (ASCE) spends several months planning and practicing for the event. It most often involves travel to another campus. Of course, like most every live event, social distancing measures due to the Pandemic called for some changes. This year teams had to stay on their own campus, find their own judges, and submit lots of paperwork and documentation electronically. CCEE’s team gathered in the engineering oval on Centennial Campus on March 29th, and built their bridge as the setting sun reflected off the glass of Fitts Woolard Hall. 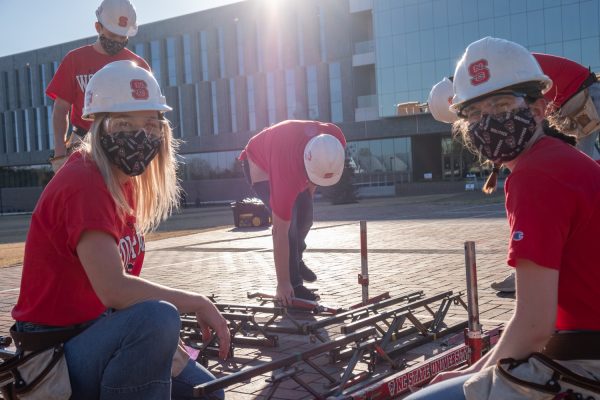 “Their first in-person meeting wasn’t until February, but the students were able to fabricate modifications, practice the assembly, and develop the teamwork needed to carry out a successful build. The team performed incredibly coming together and meeting the challenges of the competition in less than 2 months.”   Faculty Advisor Steve Welton.

Former NC State steel bridge team members served as judges for the outside build event.  The bridge was then carried into the Student Project Space where it was successfully loaded with 2,500 lbs to complete the competition process.  All of the competition data, including photography was then packaged and submitted to AISC for ranking against all the schools that participated in the Compete from Campus event.  Two weeks later the team found out that based upon the regional competition results for Carolinas Conference, NC State earned a 1st place in Construction Speed and 2nd place in the other four categories for an Overall ranking of 2nd place.

“The students on the NCSU Steel Bridge Team have impressed again this year! The team exemplified their ingenuity, drive, and dedication to compete this year,” said Greg Womack Adams. They earned valuable lessons in the design, fabrication, and erection of steel structures that will serve them well in their future careers. The team’s second place finish this year in the Carolinas Regional competition is a true reflection of their hard work!”