This article was first published in October, but was revised in early December 2018 to reflect the updates available on each of the four research projects highlighted below.

Hurricane Florence made landfall along the North Carolina coast early on September 14, 2018. A slow moving storm with remarkable amounts of rainfall, it left a devastating path of human misery, caused untold billions of dollars in property damage, and left the landscape rearranged and scarred. At times, the disaster seemed to be in slow motion, as Florence stalled and dumped as much as 35 inches of rainfall on some North Carolina communities. Inland rivers did not crest for more than a week after landfall, and when they did it was at historic levels. 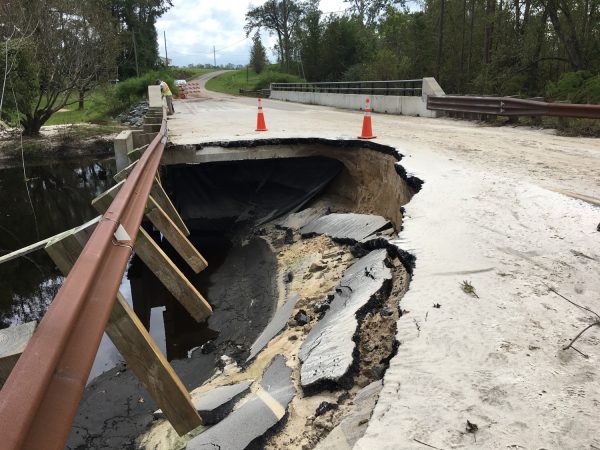 As the storm approached, CCEE Department Head Dr. Morton Barlaz issued a call for proposals for rapid response research. Three teams were awarded departmental funds to deploy into the field as soon as conditions were safe. “We knew that this was a unique and very time sensitive opportunity to gather data that relate to building resilient infrastructure, and advancing knowledge about storm preparedness,” Barlaz said. Additionally Dr. Brina Montoya was recruited to work on a National Science Foundation (NSF) Geotechnical Extreme Events Reconnaissance (GEER) team. GEER teams are made up of geotechnical experts from the around the globe that travel to disaster sites, including earthquakes and hurricanes, to collect data and gather insights.

The work of CCEE researchers began in earnest as thousands of North Carolinians braced for the impending disaster. In the days and weeks since the catastrophic storm, countless hours of fieldwork and laboratory analysis are leading to invaluable data sets and findings. Find out more about each of the four teams, including their progress and ongoing plans.

Between September 21 – 27, 2018, Dr. Brina Montoya and several graduate students began their work with the NSF GEER team. The team split into several groups to cover the state as efficiently as possible, with the NCSU team covering 13 different sites. The focus of GEER is to collect perishable geotechnical data, such as documenting soil deformations supporting infrastructure and collecting relevant soil samples, that can be used to advance research and improve engineering practice. 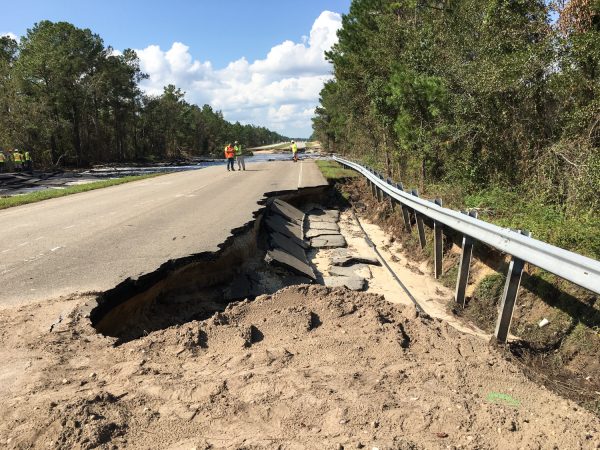 The NCSU team traveled to sites within the Neuse and Cape Fear River Basins, which were subjected to significant loading during the hurricane. Dozens of flood control structures, such as dams and levees, experienced significant levels of flooding that lead to overtopping and sometimes dam breaches. Scour was observed at some bridge foundations due to the extended flooding. Several highways were undermined from either slope failures from softened soil due to the extended rain or from flooding.

“We wanted to see infrastructure that behaved poorly and also that behaved well. For example, the NCDOT knew of bridges that did not do well in Hurricane Matthew so we observed the same bridges performing well after Hurricane Florence, likely due to the fixes the NCDOT made.  The conditions were challenging, but this is the kind of experience that can not be replicated in the lab, and I’m grateful for the opportunity for myself and my students.”

Montoya also mentioned observing several earthen dam failures, likely due to trees being allowed to grow on the dams. “We know that’s bad for a dam’s structural integrity and it shouldn’t have been allowed to happen,” Montoya said.

UPDATE: The GEER team’s report is expected to be released to the geotech community in December. The report will include documentation of observations made immediately following the hurricane. It will be posted here as soon as it is available.

The heavy rainfall from Florence was expected to affect the water quality in several coastal rivers, due to runoff from industrial and agricultural sites, so a team of researchers collected water samples before and after the storm. On September 21st, while rivers were still cresting, Drs. Angela Harris and Josh Kearns, in collaboration with Dr. Ryan Emanuel from the Department of Forestry and Environmental Resources, began their work. Samples were collected from streams, slow-moving or still water in floodplains connected to streams, disconnected flood waters trapped in isolated canals, wetlands, and topographic depressions. 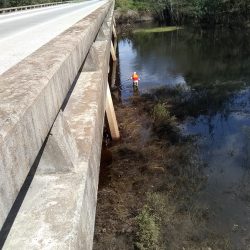 The teams sampled characteristic flood waters downstream of industrial agriculture sites and other industrial facilities, as well as reference areas where these activities are assumed absent. Over the course of four days, they were able to collect 44 samples from impacted watersheds, including the Neuse, Lumber, Cape Fear, and Waccamaw Rivers. “We wore waders, navigated flooded areas and road closures, and fought off swarms of super mosquitoes to obtain the samples,” Harris says. “We did not wear bug repellant because we wanted to reduce the potential for contaminating samples.”

Samples arrived to the lab in the late afternoon, and then had to be processed immediately for both microbiological and chemical contaminants. Specifically, samples will be analyzed for E. coli, which is an indicator of fecal contamination, as well as nutrients, heavy metals, a wide range of organic contaminants, anti-microbial resistance genes, and source-specific fecal markers that make it possible to distinguish human, swine, and poultry fecal contamination. Harris and Kearns worked alongside a team of graduate student and post-doctoral researchers. The team included Dr. Sophia Kathariou from the Department of Food, Bioprocessing, and Nutrition Sciences who is testing for pathogens in the water samples. CCEE researchers also worked with Drs. Natalie Nelson and Mahmoud Sharara from the Department of Biological and Agricultural Engineering to study spatial relationships between contamination and different land-use practices.

Many of the sites the team chose were included because of previous sampling done at those locations by Emanuel following Hurricane Matthew in 2017. This will enable comparisons between contamination that resulted from Hurricanes Matthew and Florence.

“Our analyses will provide insights into flood water contamination in agriculturally diverse areas on an unprecedented scale. Results will inform recommendations for emergency response and waste management strategies to protect human health and the environment during extreme floods.”

UPDATE: This team of researchers was able to return to the sample sites approximately one month after the initial samples were collected and collect additional samples. They are currently working on spatio-temporal analyses of water quality data, and are continuing to process samples for additional water quality parameters including emerging chemical contaminants. Supported now by the North Carolina Policy Collaboratory and a National Science Foundation RAPID grant, they will return to the same sites two more times in the coming months to better understand the temporal dynamics of these surface water systems and potential long-term impacts of extreme flooding events on water quality.

During hurricanes and other natural disasters, information about flooding hazards, rescue operations, evacuation routes, shelter, and supplies is critical. Through social media platforms, the public can rapidly contribute to and access information as impacts are unfolding. In Hurricane Florence, people sought and received water rescue using Twitter, an online platform called Crowdsource Rescue, and Facebook. The diffusion of disaster information through social media platforms is an important source of aid for victims, and an understanding of how information is conveyed and received via smart technologies can be vital in planning rescue operations, evacuation strategies, and flood control.

Dr. Emily Berglund and Ph.D. candidate Morgan DiCarlo began collecting information before Florence made landfall – observing how people were interacting on Facebook’s live hurricane crisis map, following Twitter hashtags such as #florence, #cajunnavy, and #rescue and saving important screenshots. They downloaded Zello, a walkie-talkie like app, subscribed to a “Hurricane Florence!” channel and listened in real time to broadcasts from people seeking water rescue. “So many people contribute to social media sites and can delete their posts at any time. I had to act in the moment to monitor the way information was being diffused over various platforms,” DiCarlo said. “When we briefly lost power the night before landfall, I sat out in my parking lot, charging up my phone in the car so I could stay in the loop during the storm.”

“I was a freshman on Long Island during Superstorm Sandy, and I responded as an emergency ambulance volunteer in its aftermath. I saw firsthand that information channels become muddled during a disaster and how devastating the impacts of a storm can be. Since then, while studying civil engineering, I have always thought about how the infrastructure systems we design for people – roadways, traffic flow, electrical grids and water distribution – could be more resilient in a crisis.”

UPDATE: Using text analytics software, Dr. Emily Berglund and Morgan DiCarlo harvested 37,000 tweets and retweets related to Hurricane Florence hashtags.  In addition, they crafted a survey regarding social media use and hurricane damages that has accrued more than 380 responses so far. They are seeking collaborations with key crisis players, such as county governments, the Cajun Navy and Crowdsource Rescue, and are launching the analytics portion of the study.

Much of the North Carolina coast is lined with sandy beaches and dunes, which can erode during storms, allowing sand onto major roadways and floodwaters into communities. To develop predictions for this erosion and its effects on infrastructure, it was critical to collect observations shortly after the storm. A multi-disciplinary team led by Dr. Elizabeth Sciaudone traveled to Dare County to collect time-sensitive data at Kitty Hawk, Nags Head, Pea Island, and Hatteras Island. Working in conjunction with the Institute for Transportation Research and Education (ITRE), the Center for Geospatial Analytics in the College of Natural Resources, and industry partner SenseFly, researchers surveyed beach and dune changes. Real-Time Kinematic GPS equipment was used to survey select cross-shore beach and dune profiles and document the extent of dune erosion and overwash (inland sand deposits), such as when NC Highway 12 becomes covered after large storms. 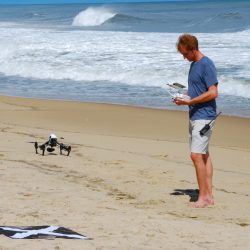 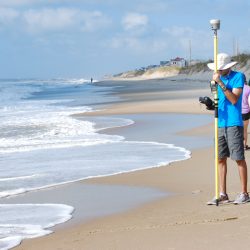 Unmanned Aerial Vehicles (also known as UAVs, or drones) were used to obtain photos and videos that will be used to create digital surface models of the topography and examine erosion patterns. The team also collected samples of the sand across the beach and dune to see how the storm affected the distribution of grain sizes. These data sets will help researchers learn more about how storms move sand and improve numerical models of the area.

UPDATE:  A total of 39 sediment samples collected in the field have been analyzed using specialized equipment available in the Department’s coastal lab. Grain sizes in locations where beach nourishment has been placed were observed to be generally coarser than those in natural areas. Additionally, “dunes” built up by earth moving equipment had much coarser median grain sizes than their natural wind-blown counterparts. Comparisons of pre- and post-Florence data sets have been performed at 44 ground survey profiles, with the most substantial beach profile impacts observed south of Cape Hatteras. Analysis of the data collected by the drones is ongoing, and will be used to supplement research on wave runup on a beach nourishment project. The final survey report will be released to the research community in January 2019.