How do we develop new methods for analysis and design of resilient structures by studying mechanisms of failures at multiple scales?

Characterization of structural behavior is critical for the safety of civil infrastructure systems. At NC State, research on traditional and new materials for structural design includes both experimental and computational methods. Among the materials studied at NC State are Concrete, Steel, Masonry, and fiber reinforced polymers. These materials are utilized for both bridge and building components subjected to hazards such as earthquakes and hurricanes. Research in this area has been supported by the Alaska, California, and North Carolina departments of transportation as well as numerous federal agencies and industrial organizations. 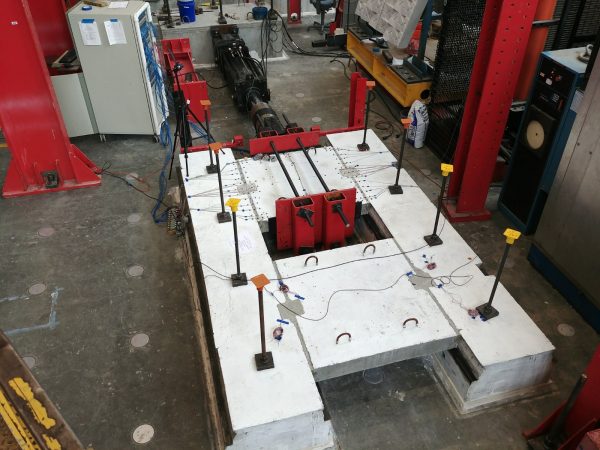 This photo illustrates the seismic testing of the connection between pre-cast bridge girders. Such systems are commonly employed for accelerated bridge construction, with adjacent girders connected at discrete intervals via welding of shear plates and grouting of the keyway between the girders. 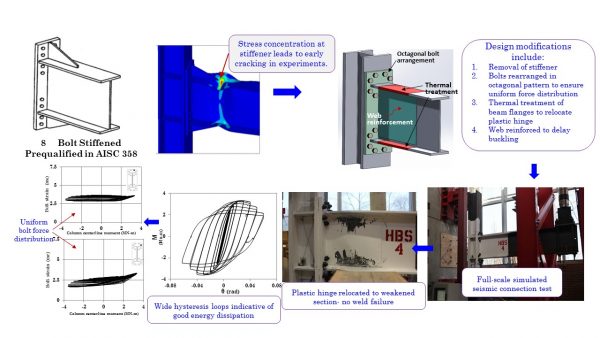 The eight bolt stiffened extended end plate connection is one of the connections prequalified by AISC 358 for seismic use. The endplate stiffener of the connection introduces a stress concentration that may lead to early failure as demonstrated in laboratory experiments. Therefore, we have introduced several design modifications to this connection. The stiffener has been removed and the bolts rearranged in an octagonal pattern to promote uniform bolt force distribution. The plastic hinge has been relocated by selectively reducing the strength of the beam flanges through thermal treatment. Web reinforcement has been added to reduce/delay local web buckling and strength degradation. A full-scale connection test demonstrated that the modified connection can sustained 6% story drift far exceeding the 4% story drift requirement of AISC 341. Recorded bolt strains indicated uniform distribution of bolt forces.

FRP materials show promise for deployment in rapid repair applications. In this photo, an FRP anchor is tested for pull-out strength for application in reinforced concrete bridge column repair. 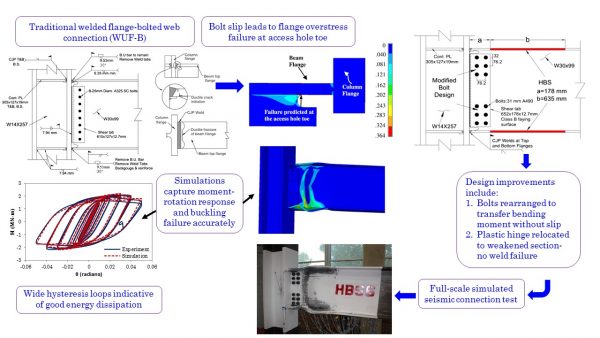 Despite several improvement to welded flange-bolted web connections following the Northridge Earthquake, the connection failed to achieve the required ductility for seismic use. In this project, the failure mechanism was studied through detailed finite element (FE) analysis and determined to be a result of bolt slippage and flange stress overload. Therefore, we have introduced two (2) design modifications. The bolts have been rearranged to better transfer bending moment and the plastic hinge has been relocated by selectively reducing the strength of the beam flanges through thermal treatment. A full-scale connection test demonstrated that the modified connection can sustain 5% story drift. FE simulation model developed are shown to accurately predict connection moment-rotation response and buckling failure mechanism.