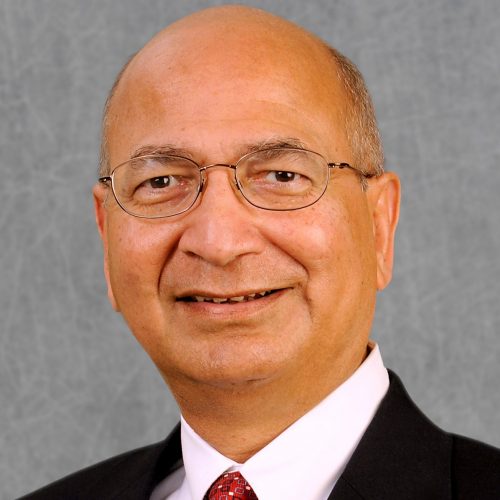 Ajaya Kumar Gupta is a Professor Emeritus of Structural Engineering and Mechanics at North Carolina State University (NCSU), 2006-, where he has been on the faculty since 1980. Earlier, he served as an Associate Professor and Senior Research Engineer at Illinois Institute of Technology, 1976-80, and led a group of specialists at Sargent & Lundy, 1971-76.

Professor Gupta excelled in several research areas, especially in nuclear power plant structural safety. In 1991, he founded the Center for Nuclear Power Plant Structures, Equipment and Piping (now, Center for Nuclear Energy Facilities & Structures, CNEFS) at NCSU and was its Director until 2001. The only university-based research group of its kind, the Center developed an international reputation under his leadership. It had up to 20 government and industry members worldwide and received additional support from the U.S Nuclear Regulatory Commission (USNRC), U.S. Department of Energy (USDOE), Electric Power Research Institute (EPRI) and others. Ajaya Gupta served on the university’s PULSTAR Reactor Safeguards Advisory Committee (RSAC) and participated in auditing reactor operation, 2004-08.

Professor Gupta authored Response Spectrum Method (Blackwell/CRC 1990), a highly regarded book on the topic, and authored or coauthored numerous scholarly papers and reports. He has lectured at many conferences, universities and industry groups worldwide. Results of Dr. Gupta’s research are incorporated in the ASCE (American Society of Civil Engineers), ASME (American Society of Mechanical Engineers) and international codes and standards, and adopted by regulatory authorities. The ASCE honored him in 1996 with the Bechtel Energy Award for leadership in developing safe and economical nuclear energy through teaching and research, and in 1982, with a Huber Research Prize for young engineers in recognition of his contribution to the profession through research and professional activities. Ajaya Gupta was one of two nominees for Commissioner of the U.S. Nuclear Regulatory Commission in 1999 submitted to President Clinton by the White House Office of Personnel.

Dr. Gupta is Chairman of the Nuclear Plants Current Issues Symposiums (NPCIS), the latest of which, NPCIS 10, was held in Charlotte in December 2016. These Symposiums are organized by NCSU and several of them have been sponsored by the USDOE, USNRC, EPRI and NEI (Nuclear Energy Institute). He instituted the Current Issues series at NCSU in 1986. Ajaya Gupta is a member of the Advisory Board of the International Association for Structural Mechanics in Reactor Technology (IASMiRT), the parent of the SMiRT conferences, since 2005. He was President of the Association and held other offices on its Board of Directors, 1997-2005. Gupta was Chairman of SMiRT 16 held in Washington DC in 2001. He was Senior Advisory Board Chairman, SMiRT 19, Toronto, 2007, an editor of Nuclear Engineering and Design, 2001-04, and Chairman of the ASCE Energy Division Executive Committee, on which, he served in various capacities, 1988-95.

Ajaya Gupta is married to Kristine, a former Assistant Attorney General, NC Department of Justice. They have four daughters and six grandchildren.

Dr. Gupta is interested in understanding behavior and failure modes of structures and components and their design for desired safety level under various loads including earthquakes and other hazards. He advocates use of simplest computational tools appropriate for a situation. Highly sophisticated computer software generate massive output. They are prone to undiscernible input errors and misinterpretation of results; therefore, should be used sparingly by experts with advanced proficiency.