Recent research finds that repeated flooding events have a cumulative effect on the structural integrity of earthen levees, suggesting that the increase in extreme weather events associated with climate change could pose significant challenges for the nation’s aging levee system.

“Traditionally, levee safety inspections are based on visible signs of distress on the surface,” says Rowshon Jadid, a Ph.D. candidate at North Carolina State University and first author of a paper describing the research. “What we’ve found is that as a levee goes through repeated flood events, it gets weaker – but the damage may be invisible to the naked eye.”

“This is particularly relevant now, since we’re seeing severe flooding more often,” says Brina Montoya, co-author of the paper and an associate professor of civil, construction and environmental engineering at NC State.

The study draws on data from the Princeville levee in North Carolina, as well as flooding associated with hurricanes Floyd and Matthew. 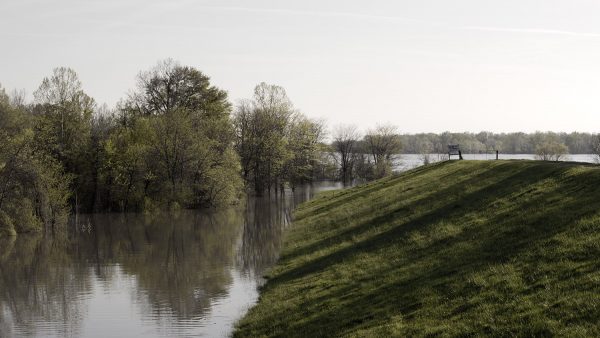 Levees are earth embankments that protect against flooding – and there are a lot of them. According to the U.S. Army Corps of Engineers, there are 45,703 levee structures in the United States, stretching for 27,881 miles. On average, they’re 56 years old.

“Because these levees are aging, and we have limited resources available to maintain them, we need to determine which levees should be prioritized for rehabilitation efforts that will reduce their risk of failure,” Jadid says.

“There are inspection regimes in place, where officials look for signs of distress and structural damage,” says Mohammed Gabr, co-author of the paper and Distinguished Professor of Civil Engineering and Construction at NC State. “However, some of these visual signs can be missed and, in many cases, by the time we can see the problem, it’s either too late or too expensive to fix.

“The work we’ve published here demonstrates the increased risk of levee failure with the repeated flooding cycles and serves to help the profession with identifying levees with the highest risk of failure before signs of distress are visually observed.”

Researchers are in the process of using this study’s findings, as well as additional data, to develop tools that can facilitate more accurate identification of levee damage and the development of more accurate failure criteria.

The paper, “Effect of repeated rise and fall of water level on seepage-induced deformation and related stability analysis of Princeville levee,” is published in the journal Engineering Geology. The paper was co-authored by Victoria Bennett of Rensselaer Polytechnic Institute.

The research was done with support from the Coastal Resilience Center, which is funded by the U.S. Department of Homeland Security under grant number 2015-ST-061-ND0001-01.

Abstract: The Princeville levee, and flooding associated with Hurricanes Floyd and Matthew, is used as a case study in which the analyses are focused on the effect of repeated rise and fall of water levels (representing severe storm cycles) on the stability of the levee and the risk of failure. The analyses included strain-based and strength reduction approaches and are conducted using the finite element program Plaxis 2D. The limit equilibrium stability software “Slope/W” was also used for comparative study. The strain-based limit state approach considers the uncertainty of soil properties and is used to characterize the levee performance under repeated storm loading in terms of damage levels (or limit states). The strain-based analyses results show a progressive development of plastic shear strain zone within the levee as the number of storm cycles is increased. The accumulation of such shear strain leads to increasing the probability of exceeding a given performance limit state. As more flooding cycles are introduced, the shear strain values increase by a factor of 3.5 from cycle 1 to 6, and therefore reflect the increasing level of failure risk. In parallel, the deterministic stability factor of safety obtained from limit equilibrium method remains unchanged and slightly changes for strength reduction method with an increased number of rises and falls of the water level. The consideration of “rapid” drawdown conventionally used in limit equilibrium stability analyses (where no consideration for time is included), instead of more realistic rate based on drawdown hydrograph leads to conservative estimate of factor of safety. The analyses results demonstrate the increase in risk with repeated hydraulic loading.