Dr. H. Christopher Frey received the 2019 Frank A. Chambers Excellence in Air Pollution Control Award from the Air & Waste Management Association at the 112th Annual Conference of the A&WMA in Quebec City, Canada on June 27. 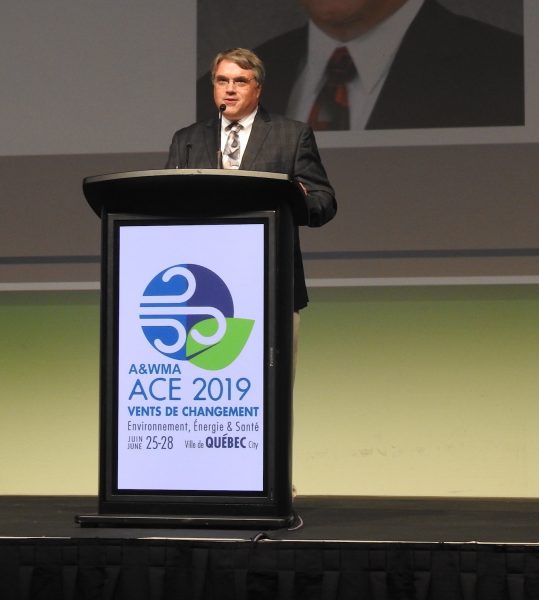 Frey is the Glenn E. and Phyllis J. Futrell Distinguished University Professor at North Carolina State University, where he has been on the faculty of the Department of Civil, Construction, and Environmental Engineering for over 25 years. Dr. Frey is an internationally recognized expert in air quality. His research addresses the continuum between energy use, emissions, and exposure to air pollution, as well as tools and techniques for developing policy relevant insights.

Frey demonstrated and transferred into practice probabilistic methods in emission inventories and exposure assessment. He was the Lead Author for guidance by the Intergovernmental Panel on Climate Change (IPCC) regarding uncertainty in greenhouse gas emission inventories, and contributed to the World Health Organization working group that developed guidance on uncertainty in exposure assessment.

Frey is a pioneer in the use of Portable Emission Measurement Systems (PEMS) to measure the activity, energy use, and emissions of onroad and nonroad vehicles under real-world conditions. He demonstrated the conceptual basis that the U.S. Environmental Protection Agency (EPA) incorporates into its national MOVES model based on second-by-second data and Vehicle Specific Power (VSP). Additionally, Frey has led projects to improve the methodological underpinning of simulation models of inter-individual variability in population-based air pollution exposure models, and to design and conduct field studies of real-world exposures to air pollution. Frey is also recognized as an advocate for the use of objective science to inform public policy, especially in the context of regulations aimed at protecting public health and the environment.

Because of his extensive experience and expertise, Frey has been sought for significant scientific leadership roles. He has served on two National Research Council (NRC) study committees and on the NRC Board of Environmental Studies and Toxicology. From 2012 to 2018 he served on the U.S. EPA Science Advisory Board. From 2012 to 2015, he was Chair of the U.S. EPA’s Clean Air Scientific Advisory Committee (CASAC), and between 2007 and 2018 served on ten CASAC review panels, including review panels for all six pollutants regulated under the NAAQS. He chaired CASAC review panels for ozone, nitrogen dioxide, and lead.