The CCEE Alumni Hall of Fame was established in 2017 with 19 inaugural inductees. In 2018, and again this year, we inducted 3 more outstanding individuals. Since the Bachelor of Science curriculum in Civil Engineering at NC State was established in 1895, we have awarded more than 10,500 Bachelor of Science, 2,600 Masters and 540 Ph.D. degrees. To be chosen from among these thousands of alumni is truly an honor.

In early November, the department held its third annual induction ceremony for the CCEE Alumni Hall of Fame in the James B. Hunt Library on Centennial Campus. The three inductees were Emily Brown Blount, Herbert P. McKim, Jr. and J.W. Willie York.

From the room where the ceremony was held, there was a clear and wide view of the construction of Fitts-Woolard Hall. When department head Dr. Morton Barlaz began his remarks, he joked “holding the attention of a group of engineers while there is a great construction project out the window, is not easy. This time next year, we will be housed in that building.” It was a fitting backdrop for honoring the 3 new inductees.

Unfortunately, Mrs. Blount was unable to attend because of a recent injury, but the audience enjoyed the acceptance speech of Herbert McKim, and from Smedes York, who accepted the posthumous award for his father J.W. Willie York.

McKim addressed the audience briefly, extending deep thanks to his family, and to his business partner, Mr. Mike Creed. Creed was in the audience and was one of the inaugural inductees in 2017. McKim recounted growing up in Wilmington, NC, the son of an architect with a degree from NC State Design School. As a young child, Herbert McKim told his father he wanted to do exactly what his father did, but his father dissuaded him from architecture and encouraged him to pursue structural engineering. McKim is a founding partner of McKim and Creed, a civil engineering consulting firm that now employs hundreds of engineers across the country. He recounted the early years and some of the hurdles the company faced as they grew.

Smedes York also asked the audience to travel back in time and imagine Raleigh in 1933 when his father Willie York graduated with a construction option. “It was not exactly the height of the business cycle,” Smedes York reminded the audience. He also talked about the risk his father took in the late 1940s when he built Cameron Village, a shopping center with surrounding residential neighborhoods – one of the first developments of its kind in the country. Willie York was instrumental in many other iconic Raleigh sites such as the Velvet Cloak Inn and the original Farmer’s Market.

The stories were interesting, humorous, and thought provoking, and were enjoyed by family, friends, and colleagues in the audience. The department extends deep congratulations along with a sense of pride in honoring our outstanding Alumni. The breadth of their accomplishments and service is inspirational.

You can read more below about each inductee, and see more photos from the event on our Facebook page.

Emily Brown Blount was the first female graduate of the department, receiving her B.S in civil engineering in 1953 and a professional degree in Civil Engineering with a concentration in transportation in 1955. Following graduation, she began a career at the North Carolina Department of Transportation, starting as the Associate Traffic Engineer in the State Highway Department. Five years after graduating, she became the first North Carolina woman registered as a professional engineer and as a professional land surveyor. 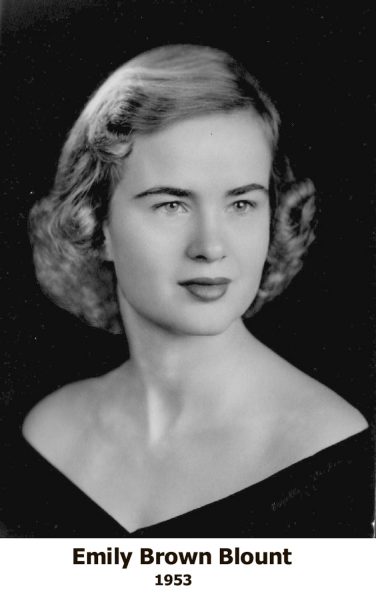 Blount went on to have a 40-year career at the North Carolina Department of Transportation before retiring so that she could “travel to see the world”. Blount has been recognized for her outstanding achievements over the years with numerous awards including the 1978 Raleigh Engineers Club Outstanding Engineering Award, the 1997 R.V. Moss Lifetime Service Award from the NC Section of the Institute for Transportation Engineers, and in 2006, she was inducted into the NC Transportation Hall of Fame. Blount remains dedicated to her profession and still maintains her PE license by regularly attending engineering conferences such as the department’s annual Paul Zia Distinguished Lecture and by speaking with high school science majors and young women who may be interested in engineering. Additionally, Blount remains connected to our department through alumni engagement activities and by regularly contributing to the department’s enhancement fund.

Herbert P. McKim, Jr. earned a bachelor’s degree in civil engineering in 1973 and his master’s degree in engineering in 1975 from NC State. He went on to earn an MBA from the University of North Carolina at Wilmington in 1985, where he was named Most Outstanding Student of the Cameron School of Business. During his undergraduate years, McKim played on the varsity tennis team, where he lettered all four years.

Despite the difficulty of being a student athlete in a very rigorous program, McKim was inducted into Chi Epsilon, a National Honorary Civil Engineering Fraternity, and also pledged Sigma Phi Epsilon Fraternity as an undergraduate. Following graduation, McKim and fellow N.C. State classmate Michael Creed moved to Wilmington, N.C. and started their own engineering firm. McKim & Creed Engineers, PA, was founded on June 1, 1978. In the early 1980s, as the firm began to grow and diversify, McKim re-focused his time from project management to the business side of the engineering firm, using his organizational skills and entrepreneurial spirit to propel the company into the Engineering News-Record (ENR) Top 500 Companies by 1992. Today, McKim & Creed has more than 20 offices across the country with their headquarters proudly located on Centennial Campus. McKim has been recognized for his accomplishments with numerous awards including the ACEC/NC Community Service Award, the Distinguished Service Award from PENC, and the PENC Outstanding Technical Achievement Award. Herb is a Life Member of the Alumni Association and former Alumni Association Board of Directors member who continues to stay connected to the University through alumni engagement activities in addition to being a longtime supporter of the University.

J.W. Willie York received his B.S in civil engineering with a construction option in 1933. Following graduation, York worked at C. V. York Construction Co. until 1941 when he left Raleigh to work on construction at the Marine Corps base in Cherry Point, NC. Following World War II, he established his business (J. W. York and Co., now known as York Properties) in Raleigh, which built post-war housing.

In 1949, York branched into commercial real estate development, building Cameron Village — one of the first suburban shopping centers in the country — surrounded by 561 apartments and 100 homes. The project won the National Association of Homebuilders’ award for best neighborhood development and is still in use and evolving today. In addition to his business acumen, York was a leader in the community, serving the state as Chairman of the Board of Conservation and Development from 1964 to 1968 under Governor Dan Moore and on the Raleigh school board. York put forth the motion to desegregate the Wake County school system in 1960 and the school board honored his leadership by naming a Raleigh elementary school after him. York remained connected to the University through both philanthropy and volunteerism until his passing.