Following a decisive win at the Carolinas Conference in early April, CCEE’s Steel Bridge Team was invited, for the third consecutive year, to compete at the National Student Steel Bridge Competition. From a field of 230 teams that participated regionally, our team was one of only 42 invited to the national contest hosted by the University of Illinois at Urbana-Champaign on May 25-26. 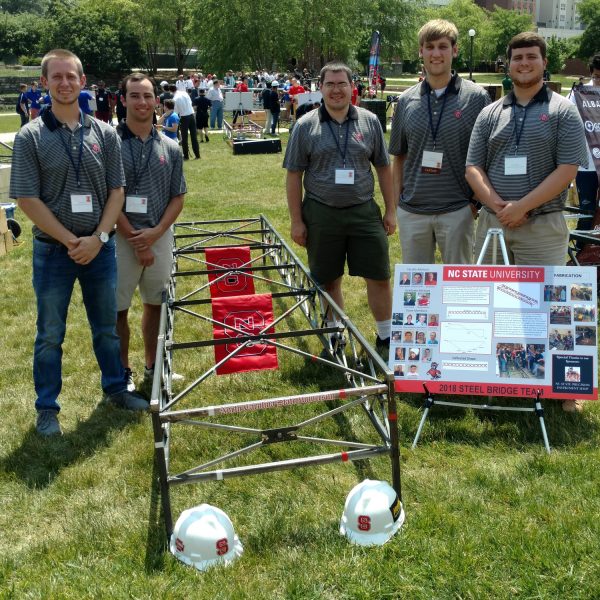 “We had a great group of dedicated students on the bridge team which allowed us to stay on schedule and ultimately meet our goal of having the bridge ready in time to practice before the competitions,” said Steel Bridge Team captain Sanders Rohs (BSCE 2018). “The practice paid off, and we got our build time down to under 10 minutes.” Notably, their construction speed was less than half the time of the second-best team at the regional conference. In Illinois, at the national competition, the team completed the assembly of their 178 pound bridge in 8.57 minutes. This time, along with a good ranking in the stiffness category – the bridge had an aggregate deflection of 1.080 inches when fully loaded with 2,500 pounds – earned the team an overall ranking of 29th. “That’s our best finish of the 3 years we’ve attended nationals,” said faculty advisor Steve Welton.

“A neat aspect of nationals is getting to see the 40-50 best bridges in the country and beyond. Each bridge has the same rules and restrictions, but no two bridges are exactly alike,” said Rohs. “I really enjoy observing other school’s design strategies and build methods. We always leave nationals with new ideas of how to improve our bridge for the next year, and this is a huge part of our continued success at NC State.” 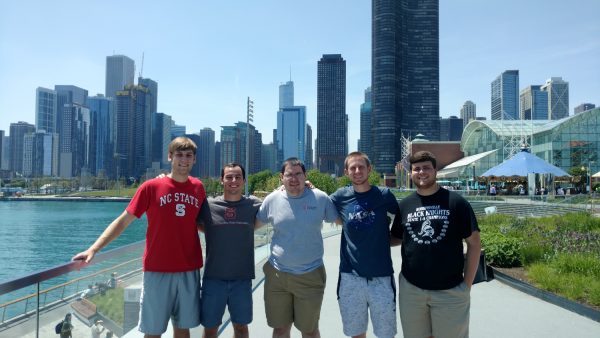 Five members of CCEE’s student chapter of the American Society of Civil Engineers along with advisor Welton flew to Chicago and spent a day there before the competition. “A highlight of this trip was being able to spend a day in Chicago. It’s the largest city I have ever visited and it opened my eyes,” said Caleb Sawyer. “I learned that there is always a new challenge in civil engineering that can be tackled and conquered even if it sounds daunting at first.”

Sophomore Kadin White echoed the sentiments about the value of touring Chicago. “Making this trip to the NSSBC has made a huge impact on the way I look at structures, and it has also given me a head start to my future civil engineering classes. We got to spend a day in Chicago before the competition, and when we were walking around the city Mr. Welton pointed out numerous buildings and bridges, and explained the significance of different designs in the structures and how these designs related to our classes,” White said. “Steel Bridge Team has been singlehandedly the best decision I have made since joining the CCEE department.”